Bernina sewing machines are not your average machine when it comes to presser feet. Normally when picking out a new foot, you simply have to worry about High Shank, Low Shank, Slant Shank, or Snap-On. Bernina decided to develop their own shank systems that are not compatible with any other brand of machine. 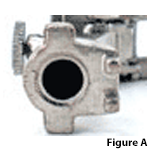 Old Style Feet – Manufactured between 1954 and 1998
Bernina started producing the 530 Record in 1954, this is the first model that had what we call old style feet. The top of the shank has a rounded back and there is no cut-out (see figure A). In the early days of old style feet, the foot number was actually stamped into the metal of the shank. Eventually, Bernina started putting the numbers on a white sticker with black lettering on the front of the shank. During the production of old style feet machines, Bernina increased the stitch width of these machines from 4.5mm (ie-930s) to 5.5mm (ie-1001). There are some incarnations in-between as well including the optical feet. Wherever possible, they tried to make their Bernina presser feet backward compatible. Tweaks were made to the shank design to ensure that you could not accidentally put 4.5mm wide foot on a 5.5mm machine.

Some people say that the change in foot design from the old style to new style came because of the built-in needle threader. The new style feet allows room for the needle threader to come down and function. I haven’t been able to confirm this though. 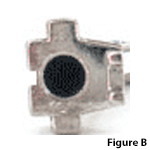 New Style Feet – Manufactured After 1996
New style feet have red lines on the sticker and the foot number is also red, unlike the old style feet that are black. The top of the shank is squared off and has a notch cut out on the top back of the shank (See figure B). These feet are between 5.5mm and 9mm for the stitch width. Since Bernina increased the cone size on the new style feet, you can’t put the wrong size foot on your machine. You may now be wondering how to tell if a specific foot is for the 5.5mm or the 9mm machines? Bernina solved this by numbering their feet and adding one or two additional versions with a letter that follows the number, such as Edgestitch Foot #10C.

No Letter after the Number
If your new style foot has a number without a letter, it will fit your Bernina models that have the patented CB Hook and a maximum stitch width of 5.5mm. These feet can also be used on 9mm stitch width machines when a 9mm width is not needed, such as when making pin tucks with a #31 foot.

The Letter C after the Number
This indicates that the foot was made for models that have rotary hook systems and a maximum stitch width of 9mm. The ‘C’ stands for coded and refers to the sensor on the foot that tells the machine to engage the wider stitch width (this is a nice safety feature). The sole of the ‘C’ feet foot is usually wider since the 9mm machine’s feed dogs are wider. There are 2 exceptions: The 2A and 16C do not have a sensor since these feet don’t require the wider stitching.

The Letter D after the Number
The presser feet that have a D after the number are designed to work with the 8-Series (models 830 and 820) Dual Feed feature. After attaching the foot, the dual feed mechanism is positioned in the cutout on the back of the foot which engages the Dual Feed system. Bernina advises against using these feet, unless you are using the Dual Feed Feature.

Using Standard Low Shank Feet
There are 2 different adaptors available that will allow you to use standard low shank presser feet and snap on feet. Some people prefer this method instead of forking out $20-$50 per Bernina presser foot. If you have other sewing machines, it may make sense financially to invest in more low shank or snap on feet that you can take from machine to machine. If you decide to go this route, I just want to remind you that if your machine uses the presser feet with the sensors, these adaptors will not trigger those sensors.

Use Snap On Presser Feet
This snap on presser foot adaptor is available in both old style and new style. When ordering your generic snap on feet for this shank adaptor, be sure you’re ordering the correct maximum stitch width that your machine has. This is a very convenient shank since you’re able to quickly switch between many different feet without having to remove the shank.

Use Low Shank Presser Feet
Chances are if you sew, you have low shank feet laying around (or 40). This low shank presser foot adaptor is available in both old style and new style. Simply install this shank like a normal Bernina foot, and then screw your low shank foot to the shank. If you install a low shank foot onto this adaptor, be sure to test with a wide zig zag to make sure the installed foot is wide enough to accommodate your machines maximum stitch width.

I know that’s a lot of information to handle but I hope we simplified it enough to make sense! 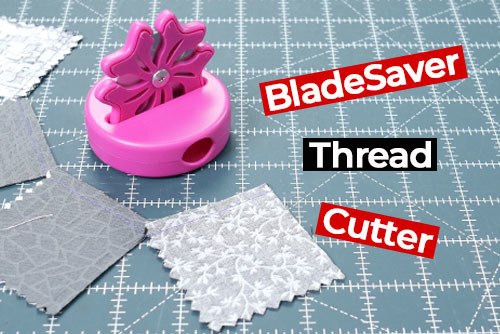 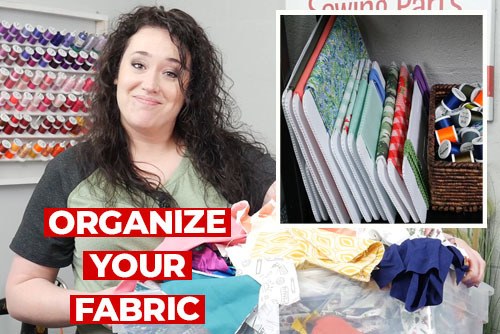 Organize your Fabric – the Easy Way!

Everyone wants a beautiful, organized sewing space, right? Use these fabric organizers and take your fabric storage to the next level. Not only are they… Read More »Organize your Fabric – the Easy Way! 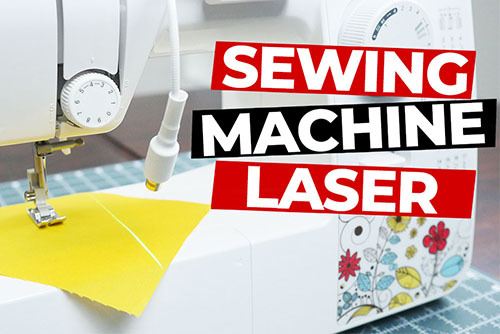